The occupants became separated when their vessel overturned. One was pulled further into the River, and one was clinging to a floating dam for safety. Water Temperatures were approximately 40 degrees, with the depth exceeding 10 feet in most areas. Fireboat 15 made a Rescue of the occupant in the river, while Chief 29 (Schoeffler) swam to the occupant clinging to the floating dam and placed him in a lifejacket. Crews from Fireboat 15 and 18-Marine-1 deployed throw bags, and brought the 2nd victim to the Fireboat. They were transferred to awaiting EMS crews who evaluated them for Hypothermia. 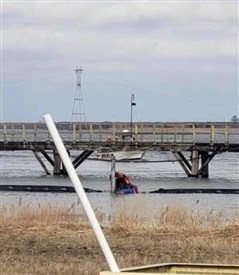 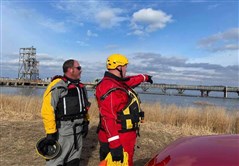